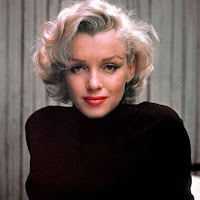 Marilyn Monroe (1926 – 1962) was an American actress, model, filmmaker, and singer. She is one of the most famous actresses on the planet of all time.
In this article, you can read Marilyn Monroe's quotes, sayings, quotations, phrases, and citations about love, happiness, fame, etc.
The sources used:
1. "Marilyn: "Quote unquote"" Janice Anderson, 1994, publisher "Parragon"
2. "Marilyn Monroe: Seductive sayings", 1994, publisher "Longmeadow Press"
3. "Marilyn: her life in her own words" George Barris, 1995, publisher "Headline"

(From the book "Marilyn: "Quote unquote"" Janice Anderson, 1994, publisher "Parragon")
I knew I belonged to the public and to the world not because I was talented or even beautiful, but because I had never belonged to anything or anyone else.


I want to grow old without face-lifts... I want to have the courage to be loyal to the face I have made. Sometimes I think it would be easier to avoid old age, to die young, but then you'd never complete your life, would you? You'd never wholly know yourself.


I'm not interested in money. I just want to be wonderful.


Fame is fickle and I know it. It has its compensations, but it also has its drawbacks and I've experienced them both.


With fame, you know, you can read about yourself, somebody else's ideas about you, but what's important is how you feel about yourself - for survival and living day to day with what comes up.


Some of my foster families used to send me to the movies to get me out of the house, and I'd sit all day and way into the night... I loved anything that moved up there and I didn't miss anything that happened. I dreamed of myself walking proudly in beautiful clothes and being admired by everyone and overhearing words of praise.


I'm a waif. I'm not calling myself an orphan.


No-one ever told me I was pretty when I was a little girl. All little girl should be told they are pretty, even if they aren't.


The truth was that with all my lipstick and mascara and precocious curves I was as unresponsive as a fossil... I used to lie awake at night wondering why the boys came after me.


My marriage [to Jim Dougherty] brought me neither happiness nor pain. My husband and I hardly spoke to each other. This wasn't because we were angry. We had nothing to say.


My illusions didn't have anything to do with being a fine actress. I knew how third rate I was. I could actually feel my lack of talent, as if it were cheap clothes I was wearing inside. But, muy God, how I wanted to learn, to change, to improve! I didn't want anything else. Not men, not money, not love, but the ability to act.


I'm going to be a great movie star someday.


Only the public can make a star. It's the studios who try to make a system out of it.


I learned to walk as a baby and I haven't had a lesson since.


I don't understand why people aren't a little more generous with each other.


Gee, I never thought I had an effect on people. Until I was in Korea.
(*Marilyn about her concert in front of the military in Korea)
The only thing was I couldn't get a dressing room. I said finally... "Look, after all, I'm the blonde and it is "Gentlemen Prefer Blondes"".

An actor is supposed to be a sensitive instrument. Isaac Stern takes good care of his violin. What if everybody jumped on his violin?


In New York I learned to make friends. Before, I never had any friends, only conquests. I didn't have the time to find real friends. I was always being looked at, had no chance to look.

Movies are my business but Arthur is my life.


I'm invariably late for appointments - sometimes as much as two hours. I've tried to change my ways but the things that make me late are too strong, and too pleasing.


I don't mind making jokes but I don't want to look like one.


[Hollywood is] a place where they'll pay you a thousand dollars for a kiss and fifty cents for your soul.


Men who think that a woman's past love affairs lessen her love for them are usually stupid and weak. A woman can bring a new love to each man she loves, providing there are not too many.


He [Arthur Miller] is a wonderful writer, a brilliant man. But I think he is a better writer than a husband.


Everybody is always tugging at you. They'd all like a sort of chunk out of you. I don't think they realize it, but it's like "grrrr do this, grrrr do that..." But you do want to stay intact - intact and on two feet.


It stirs up envy, fame does. People... feel fame gives them some kind of privilege to walk up to you and say anything to you - and it won't hurt your feelings - like it's happening to your clothing.


[Acting is] a real struggle. I'm one of the world's most self-conscious people. I really have to struggle.


I feel stronger if the people around me on the set love me, care for me, and hold good thoughts for me. It creates an aura of love, and I believe I can give a better performance.

I used to think as I looked out on the Hollywood night, "There must be thousands of girls sitting alone like me dreaming of becoming a movie star. But I'm not going to worry about them. I'm dreaming the hardest."


Husbands are chiefly good as lovers when they are betraying their wives.


The truth is I've never fooled anyone. I've let men sometimes fool themselves.


I've tried almost everything - at least once.


I sometimes feel as if I'm too exposed. I've given myself away, the whole of me, every part, and there's nothing left that's private, just me alone.


You can't sleep your way into being a star... but it helps.


I've spent most of my life running away from myself.


Being a movie star was never as much fun as dreaming of being one.


When you're a failure in Hollywood - that's like striving to death outside a banquet hall with the smells of filet mignon driving you crazy.


A career is wonderful, but you can't curl up with a career on a cold night.


It's better to be unhappy alone than unhappy with someone.


It is hard to explain how much you can fall in love while you are being bored to death, but I know it's true, because it happened to me several times.


If I'd observed all the rules, I'd never have got anywhere.


As far as I'm concerned there's future and I can't wait to get to it.


Marilyn Monroe has to look a certain way - be beautiful - and act a certain way, be talented. I wondered if I could live up to their expectations.


In Hollywood they never ask me my opinion. They just tell me what time to come to work.


A struggle with shyness is in every actor more than anyone can imagine.


When you don't want a lover, all kinds of opportunities come your way.


The worst thing that happens to people when they dress up and go to a party is that they leave their real shelves at home.


Wives have a tendency to go off like burglar alarms when they see their husbands talking to me.

The chief difference between my voice and the voices of most women I've seen is that I use mine less.


The real lover is the man who can thrill you by just touching your head or smiling into your eyes - or by just staring into space.


I've always been attracted to men who wore glasses.


Being late is a desire not to be there.


Most men judge your importance in their lives by how much you can hurt them, not by how happy you can make them.


Love is something you can't invent, no matter how much you want to.


I've come to love that line "until death do us part." It always seems to go well for a time, and then something happens. Maybe it's me.


The dark star I was born under was going to get darker and darker.


Kindness is the strangest thing to find a lover - or in anybody.

(From the book "Marilyn: her life in her own words" George Barris, 1995, publisher "Headline")
Lies, lies, lies, nothing but lies. Everything they've been saying about me is lies.
(*Marilyn about journalists)

When you love a man and tell him you're going to have his child and he runs out on you, it's something a woman never gets over. I don't think my mother did. I don't think I ever did.
(*Marilyn about her father)


As long as I can remember, I've always loved people.


What made me sad was seeing other kids with their moms and dads strolling around holding hands. Oh, how I wished I had a dad, too. <...> I had no daddy to hug, to talk to or to play with, just to love.


...When a little girl feels lonely and that nobody cares or wants her, it's just something that she can never forget as long as she lives.
(Marilyn about her life in the orphanage)


They say you soon forget the bad things in your life. Maybe for others, but not for me.


You know, children when they become adults are still at heart children. Sometimes I watch adult men. They act like little boys who have never grown up.


I was determined I would be able to succeed as a model. I never missed my modeling school classes. I always did the best I could. I wouldn't settle for second best. I had so much confidence in myself I just knew I could make it.


I believed in myself. I just had to make it. I was determined to make it. Nothing was going to get in my way.
(*Marilyn about modeling)


...For myself, respect is one of life's greatest treasures.


If there [is] only one thing in my life I [am] proud of, it's that I've never been a kept woman. And believe me, it wasn't because there weren't opportunities to become one.


The one thing I hate more than anything else is being used.


...I never stopped taking drama lessons even when I did go hungry at times.


Acting is my life.


We all have our areas. We all feel a little inferior, but who ever admits it?


My advice to couples having marriage problems is, if you're already married, try to save it. If it's impossible, don't try too long.


Personally, I think the best performance I ever gave was in The Asphalt Jungle.


The thing I want more than anything else? I want a baby. I want to have children!

Women as they grow older should take heart. They've gained in wisdom. They're really silly when they are twenty.


...I love champagne - just give me champagne and good food, and I'm in heaven and love. That's what makes the world go round.


...How to become an actress... Always be yourself. Retain individuality; listen to the truest part of yourself. Study if you can. Get a good teacher. Believe in yourself. Have confidence, too.


I'm not interested in being a millionaire. The one thing a person wants most in life is usually something basic that money can't buy.


...I'd rather be married and have children and a man to love - but you can't always have everything in life the way you want it. You have to accept what comes your way. I live alone and I hate it!